Sissinghurst village, best known for the famous castle gardens created by Vita Sackville-West, has a new attraction: a huge hole in the car park of its award-winning pub, The Milk House.

Known in geological terms as a “sink-hole”, the orifice seems to have opened up on the night of 31st March.  There were no witnesses to the event, but some locals say they heard a low rumbling noise which at first they mistook for digestive processes.

“I thought it was the cat,” said local milkmaid Eleanor Robertson.  “It is a very large cat.”

Sink holes open when subterranean alluvium is abducted over many years to create a cavity.  The cavity can open without warning, though often heavy rain is the trigger. Within the recent past sink holes in other parts of the world have swallowed bungalows, double-decker buses and even a small yacht.

Luckily for Sissinghurst, the car park of The Milk House was empty at the time of the incident, and all that was lost was a skip and a pizza-oven.  Kiwi-born owner of the pub, Dane Allchorne, is out of the country at present but commented by Skype: “Strewth”, he said.

When emergency services arrived to safeguard the perimeter this morning, however, they discovered the Weald of Kent Morris men at the bottom of the hole.  It is not known how they got there.  Attempts were made to activate the pizza oven but it would not fire in its new location, so food is being provided from The Milk House kitchen instead.  From the current “grazing menu” the dance troupe have been enjoying risotto balls with sweet potato fries, but regretted that the cheese fondu option is no longer available.

The situation is not thought to represent any immediate threat to national security, but an anti-terrorist squad will be on its way to the location just to make sure, after lunch.

The Milk House manager Joe McAuley said: “The situation is under control and we hope to re-open our wood-fired pizza oven, as planned, in time for the bank holiday weekend at the end of this month.” 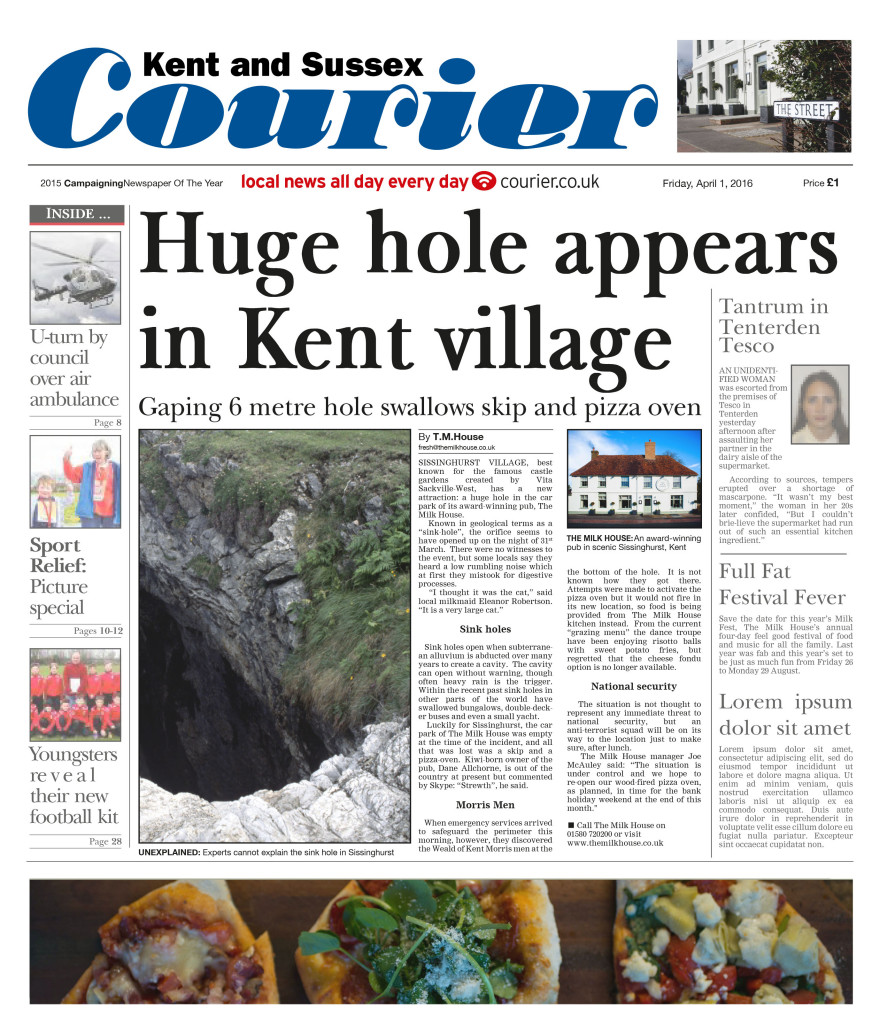